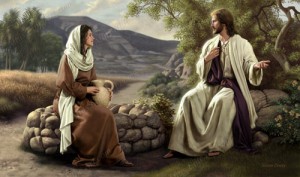 The woman answered him, “I have no husband.’ Jesus said to her, ‘You are right in saying, ‘I have no husband’; for you have had five husbands, and the one you have now is not your husband. What you have said is true!” (John 4:17-18 NSRV)

The Samaritan woman at the well is a standard text for teaching and preaching on evangelism. Brenda Salter McNeil elaborates on the story in her book, A Credible Witness: Reflections on Power, Evangelism and Race (Downers Grove: IVP Books, 2008). McNeil names the woman at the well Sam (short for Samantha), so that as McNeil examines the interactions between Jesus and Sam, her readers are able to engage more deeply and personally into the life of Sam. One of the interesting discussions in the book centers on understanding Sam’s perception of herself. McNeil writes,

“She [Sam] is probably not well educated, not wealthy nor from a highly respected social class. She has been married five times and is probably seen as a person of low moral standing and questionable spiritual character. This is an important point to explore in more detail before we move on too quickly, because women could not divorce men in that culture. Instead, it was men who divorced and rejected their wives. . . . In Sam’s case, then, on five different occasions a man has told her that she is damaged goods and he doesn’t want her anymore. Maybe that is why she has chosen to live with someone this time instead of getting married. Maybe she doesn’t believe that anyone will love her enough to marry her again.”[1]

Does this insight make a difference? I believe it does. Every time that I have heard this passage preached, the woman at the well was cast in the worst light possible—she was a tainted woman, who had made bad decisions in her life. I believe that it is very significant that this woman was rejected five times and had no say in the matter. Jesus knew of her low self-esteem and feelings of worthlessness. He knew that she was aware of her sins; therefore, he lets this woman know that he is also aware of her hurt and disappointments in life. Jesus knew that five men had divorced her; he knew that she was humiliated and shamed in her community. What must it have felt like to be an outcast and believe that you were unlovable, and then to have the Messiah personally come to you and understand what you have been through, and offer you—despite what everyone else believed about you—a life filled with love and belonging? Jesus acknowledged her worthiness and her value to God. We are to do no less.

In what ways have we also made incorrect judgments about people strictly by looking at their current circumstances or social standing in life? The person living on welfare, the divorced person, the person in rehab, etc.—do we make assumptions, like those about the woman at the well, which fail to understand how past circumstances have emotionally and socially impacted their lives? Have we cast people under a system of labels, or are we taking the time to get to know them personally? If we want to share the love of God with others, we have to build relationships with people and take time to understand life from their point-of-view.  Who are the ‘women at the well’ in our own lives?

One thought on “Do you know the woman at the well? Probably not”